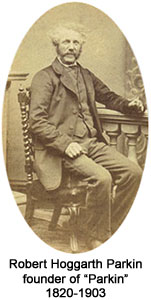 Parkin and Jackson was founded in 1855 in Crosby Ravensworth by Robert Parkin, the company was initially named “Parkin”.

Born in Orton Robert Parkin left school at the tender age of 11 years old, unable to write his own name. Later in life when Robert became a skilled mason he kept account of his employees working hours by his very own pictorial system.

Although much of Robert Parkins early life is un-documented, he did spend a brief period in Yorkshire where he had worked in Darlington on George Stephenson's first railway.

When he was still young he moved to Westmorland with William Pennington who settled in Kendal and founded Pennington Lime Works. Robert Parkin settled in Crosby, initially at Belfoot, he had a stone masons shed along the south wall of the Churchyard.

He worked for nine years helping to build Flass House (now a residential school for the performing arts). During this time Robert had built a square porch at the front door of Flass House, but when it had been completed the then resident Miss Dent had a small problem, the doorway was too small, and her crinoline (a hooped skirt of the Victorian era) touched the sides as she walked in. He took the original porch down and built a larger one to allow Miss Dent to be able to walk through the doorway un-obstructed. But he couldn't bring himself to destroy the original, so he erected it elsewhere within the grounds.

Robert Parkin also built the Sun Hotel, and helped build the high stone bridge over the Lyvennet River at Maulds Meaburn to allow easier access for the Dent family to attend the local church.

His main work was with Crosby Church . This took almost thirty years in renovation and restoration of the church. To this day there is a brass tablet which was presented by Canon Weston in commemoration of Robert Parkin's memory. It reads:

“Robert Hoggarth Parkin, Stonemason, who for thirty years worked at the restoration and beautifying of this ancient church, as the faithful friend and helper of the Rev. Canon Weston.

Above the Porch outside Crosby Church there is a curious carved stone mouse which is Robert Parkins handiwork. Cannon Weston told Robert to put something to please the men, so he carved a stone mouse being pursued by a rat into a mans open mouth.

He passed away at his daughters house in Liverpool, due to the fact he had worked on the construction of George Stephenson's first railway at Darlington, the then London & North Western Railway Company, the Flying Scotsman made a special stop at Shap, specifically to bring his coffin to Crosby for the burial. 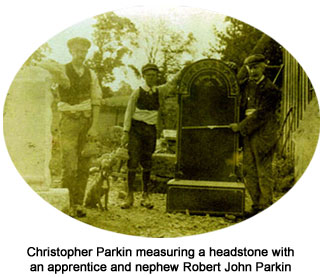 The business continued with his two sons, Christopher and William in partnership. By this time the old stonemasons shed had been abandoned and they were now based on Silver Street , Crosby Ravensworth. The company then continued with Alexander Parkin, the son of Christopher, serving his apprenticeship initially under his grandfather, then father. By this time the manufacture of headstones had become an important part of their work. A quarry was opened on Orton Scar for the supply of Limestone slabs for this purpose.

After the death of his father Alexander Parkin became the sole proprietor of the business. His Uncle William had ended the partnership with his brother a number of years prior to this.

The business continued to expand, specifically in the construction of headstones and monumental masonry of various kinds, the Orton Scar Quarry being the main supplier. At this time other materials was also being used such as marble, this had to be imported from Carrara in Italy.

During this period a number of war memorials were constructed by the company with the names of those who gave their lives in the World War I. In Crosby Ravensworth there is also a tablet on the Village Hall commemorating those who served and fell in the World War II.

Alexander and his men also built the Crosby Ravensworth Village Hall, which was erected by public subscription and completed in 1927. 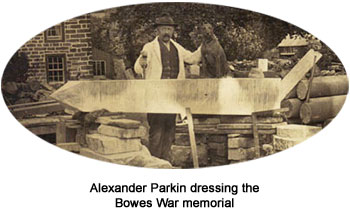 After Alexander Parkins days the business was passed to his son Reginald Parkin, under the same name of “C Parkin & Son” and his son-in-law George Jackson who was married to Alexander's youngest daughter Doris. 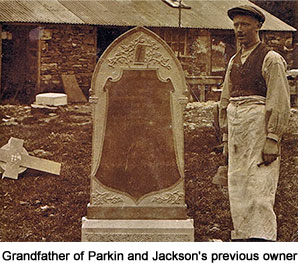 George Jackson was an apprentice with Parkin from 1919 marrying Doris in 1933. After World War II he moved the memorial masonry business to Kendal. In 1950 he joined forces with Parkin to become Parkin and Jackson Ltd.

George Jackson's son and grandson, Martin and Richard Jackson respectively, both direct descendants of Robert Parkin, ran the company until Martin hung up his hammer and chisel for the final time.

The company was then run by Kevin Bateman, today the company is run by Craig Benson and James Yates-Bell.

Both Craig and James started out as apprentices at Parkin & Jackson before taking over running the company.

In the early years everything was crafted using a hammer and chisel, today the hammer and chisel are still used alongside more modern equipment such as grinders to produce the design required.